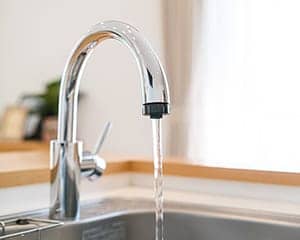 We are really pleased to have added Quooker to our list of suppliers and provide our customers with Quooker hot water taps to complete their new kitchens. The brand has grown over recent years and fits well with our premium brand.

With 100°C boiling water always available as the turn of a tap we often are asked “Are hot water taps safe?”

The flow of water is not a solid jet

The safe handle and the illuminated light ring make this unlikely, but imagine for a second that you are holding your hands under the flow of boiling water. You’d pull your hands back before you get badly burned because the boiling-water flow, while hot, is a not solid stream of water. It is made of fine drops; a huge difference to the solid jet of water that will hit you if the kettle falls over. That could cause serious burns in a single instant.

To further decrease the risk of burns, the Quooker taps are equipped with a couple of subtle features. For example, they have a rotatable spout that you can aim precisely, for example when you are filling a jug or a pan. The spout is well insulated in all models, meaning that you won’t run the risk of burning yourself after operating the Quooker.

A sophisticated safety system ensures that a Quooker will never automatically dispense boiling water. You first have to press the handle twice and then turn it. It is only then that boiling water flows from the tap. This system has been extensively tested. The complex press-turn movement means that the risk of ‘accidentally’ turning the boiling-water tap on is very small. This helps to protect young, curious children. In addition, the button has a light ring that illuminates while the tap is on to warn the user: warning, I’m dispensing boiling water!

Quookers are firmly affixed to the work surface, meaning they cannot tip over. A kettle, however, can tip over, as can a pan of water on the hob. These two cause the vast majority of accidents with boiling water. They can be caused, for example, by young children grabbing hold of the loose kettle cord and pouring the water over themselves, or by you bumping into the hob. Accidents of this kind are simply impossible with a Quooker in your home.